Pathextraction and -Planning for Lasercutting

The goal of this Bachelor thesis is to design a vision system for the laser welding machine LWM 1410 of BW-TEC. Images are to be taken from a processing object of which characteristics are then extracted in order to be used for contour recognition. The contour is used to calculate a welding or cutting path which is traversed by the laser to perform specific machining operations on the stent craft.

The developed and parametrized algorithm serves to automate a complex process. The autonomous calculation of a path can save processing time, which in turn leads to a reduction in costs. Furthermore, process data is generated and recorded, which can be used for various purposes in optimization and monitoring.

The paths calculated by the system can be integrated into an automatic documentation process leading to a reliable, clear and constant documentation. This makes it possible to easily monitor the process.
Due to the automatic planning the process becomes robust against errors since it does not depend on human subjectivity to determine a processing path. In this way, a production process is established over several processing objects which can be easily and automatically adapted.

To calculate such a path, a camera from Basler (acA1920-155um) integrated in the laser welding machine is used to takes images of the processing object.
A video is generated and processed by a pre-process in order to generate the unrolling of the workpiece from the recorded frames. It should be noted that the object being processed by the laser welding machine can only rotate mechanically about its own axis and move linearly along it. The laser can only be adjusted in height.

The image is edited through various digital image processes in order to generate an optimal path for the CO2 laser, either for cutting or welding.
First by a Gaussian blur filter [Ref 1] and then converted into a black-and-white image with an adaptive threshold, making the features to be extracted visible. Due to the poor performance at low contrast, an additional post-process is introduced with which the image is blurred again and then binarized with a global threshold (Figure a). This leads to a considerable reduction of outliers and consequently improves precision.
Using a Canny edge detector [Ref 2] the edges of the structures are determined based on pre-processed image data.
The edges represent coordinate points in the image which are used for path detection. The path is calculated by comparing these points. A first assumption is made to define how many possible paths are available in the image. The next point of the path is determined by comparing the distances between the assumption and the remaining coordinate points. This is repeated until the complete path is found.\\
To reduce the "runaway" effect on sampled path, the found coordinate points are filtered with a median filter. Subsequently, points which lie on a line are removed to obtain a more precise translation of the laser and a more effective processing of the cutting or welding path (Figure b). 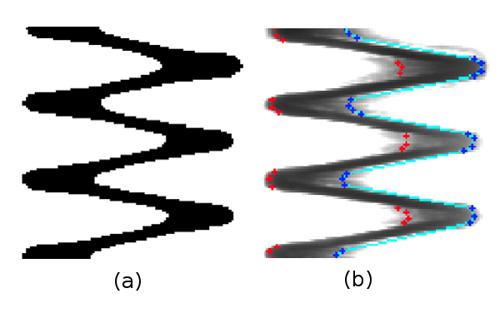 (a): Binarized image after the global thresholding. (b): Result of the path finding algorithm.
Back to search results