The Cobotic loosened the strict boundary between industrial robots and operators. There is now the opportunity to get in direct contact with the robot and demonstrate a task to it. In this work, we investigate how to learn constraints from demonstration and illustrate it through the application of glue deposition on a fixed plane.

The manual deposition of glue or sealant in series production is a repetitive and tedious task, and uniform deposition of the adhesive is difficult. With conventional machines or robots, the placement becomes uniform, but programming the trajectory is time-consuming and costly, especially for small series. By using a collaborative robot, a new workpiece could be put into production in a shorter period of time, making the employee's job more pleasant.

State of the art

A Cobot can be taught trajectories through kinesthetic demonstration, but it is difficult to teach the robot constraints regarding for instance velocity and workspace limitations. In our application, glue should be deposited on a dynamically defined plane with a constant speed to avoid track irregularities. This requires an accurate capture of the plane and the trajectory. The learned  trajectories are in many cases not optimal and sometimes  even fail to fulfill the task’s constraints.

To improve the kinesthetic teaching, an interface is to be created in which the workspace of the robot can be constrained. Also the recorded trajectories will be corrected by regression (filtering out noise) and decomposed into geometrical primitives. This makes them clearer and easier to adapt. To achieve a uniform deposition, a constant speed control algorithm is implemented.

To fulfill the above mentioned task the plane in free space should be determined first. The robot shall now only move on the previously determined surface. Then the trajectory of the glue shall be recorded kinesthetically and corrected. In the last step, the trajectory is replayed with a uniform speed. The application is controlled by a program (client) based on oMachine: a framework provided by the industrial partner that allows to easily integrate the robot and create an intuitive GUI. 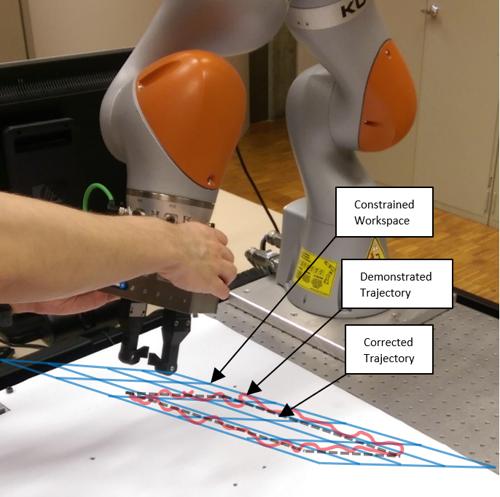 Demonstration of a trajectory on a constrained workspace 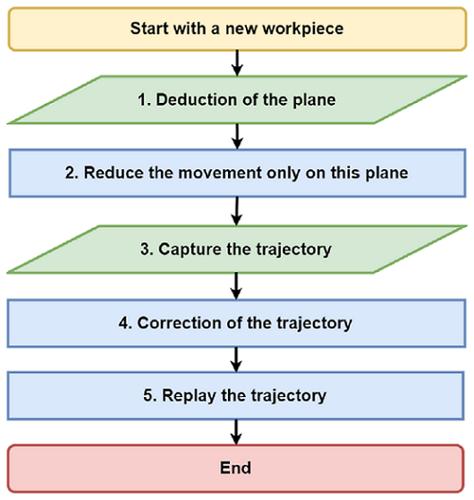 Flowchart of the process
Back to search results