A fuel cells system is able to convert the energy of hydrocarbons and hydrogen gases, through an electrochemical process, directly into electrical energy. The revision of the IHPoS School System 2.0 prototype aims to improve its characteristic, physical and ergonomic performance. Thanks to a hybrid combination of fuel cells, supercapacitors and batteries, the system works completely independently.

The project in question aims to develop a new design for the BFH IHPoS School System 2.0 and to built up two systems which will be used for teaching purposes at the the University of Applied Sciences Freiburg. The air-cooled PEM fuel cell stack (designed to provide a maximum power of 500W), the LiFePO4 batteries and supercapacitors are the core components of the system.

The entire prototype is framed within a specially designed enclosure. The aim of the project is to (i) understand how electricity can be produced/stored between these components within a hybrid system, (ii) which components can be replaced with new ones and (iii) ensure the correct functioning of the final system.

A fuel cell system is able to generate electricity at DC current (through an electrochemical process at a constant temperature), having as emission water and heat. This principle is based on the following cell reaction, which involves the oxidation of the gaseous hydrogen and oxygen, generating water:

The entire fuel cell system of the prototype is mounted on a specially designed plates directly used as transport container.  It has been designed to be as compact as possible, but also taking into account the learning aspects of the students. Microcontrollers are used to control the components, measure the effective values and communicate with the LABview software via a CAN-open interface. Finally,  the use of a rotary switch with 4 outputs allows the user to establish the following couplings, according to his own needs:

The results obtained so far are very satisfactory. The system finally presents a new and elegant design, complete with all the components and documentation. After a careful check, all connections have been tested and verified. This allowed to load the software into the mainboard as well as to run a first test of the functionality of the different components.

The realization of the IHPoS School System 2.0 opened us to a complete and rich renewable energy sector. For future development a more complex hybridization will be taken into account, taking advantage of an automated change in the coupling of the devices, also using them all simultaneously. 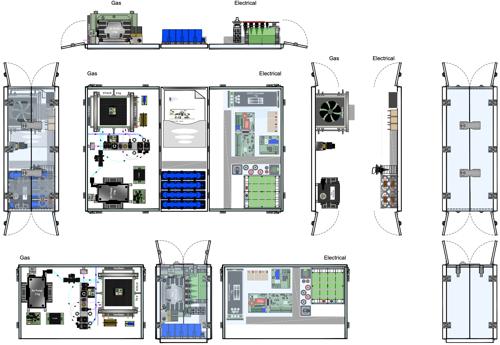 Main view of the prototype