Fully automated static warehouses require a lot of space. If a fast access to warehouse goods is not the primary goal a dynamic warehouse can save space and thus costs for real estate. A prototype shows the feasibility of an automated dynamic warehouse as well as the reliability of the hardware and of its sorting algorithm.

The goal of this thesis is a functional prototype of an automated dynamic warehouse. This prototype includes the ability to sort the warehouse to reach every stored good and to receiving and issuing these goods at the entrance. Therefore, the focus was put on implementing a sorting logic as well as developing the necessary hardware to enable such a dynamic warehouse prototype. The prototype is intended to serve as a demonstrator for the sorting logic and as a decision basis for further hardware developing steps. Thus, a certain stability is expected from the functional prototype for testing.

The prototype works according to the principle of a gantry robot with three axes. It is built by a kit of Makerbeam and three stepper motors that are controlled by a customized python program that includes the sorting algorithm. (See Figure 1)

The gantry robot loads and unloads the storage locations of the dynamic warehouse fully automatically. This means that the functional prototype does not store a good in a predetermined location, but in any one that is free. To accept different product types with various dimensions and shapes, the goods are first loaded manually into boxes. The good within the box is then automatically assigned a product ID and placed in the storage area of the functional prototype. If this good is now ordered, it is automatically picked up and issued at the entrance of the warehouse. The warehouse saves the occupied storage locations together with the assigned product ID, and thus can pick up any ordered good from the warehouse and, if necessary, shuffle some boxes first to gain access to the wanted one.

The thesis shows that the requirements for an automated dynamic warehouse are fulfilled and that the developed prototype works faultless. Tests have shown that the most efficient logic in the storage area of the warehouse is “floor-by-floor” placement. This method prioritizes loading the goods into the warehouse by going from bottom to top floor. (See Figure 2)

Due to this method, the need to rearrange the products later in the picking process is minimized which results in time savings. Therefore, this type of storing method is implemented in the algorithm. The storage, receiving and issuing process of goods work accurately such that a later integration of the dynamic warehouse into a conveyer system of a production line is possible. The scalability of the prototype has been shown in the work, such that larger and more goods could be stored by a larger prototype. 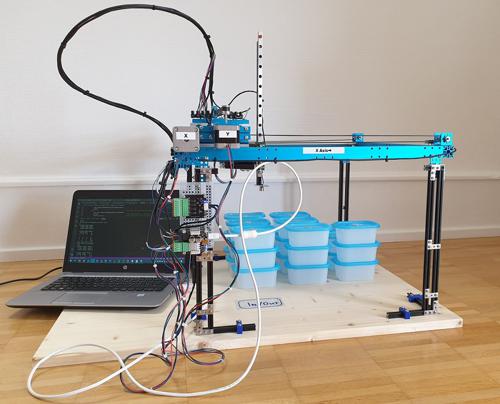