The goal of industry 4.0 is to increase flexibility, efficiency and the level of personalization of the products. That requires a higher degree of digitalization of the production. The flexibility and personalization of products is clearly given by 3D printing itself. However, only the automated integration of a 3D printer into a production line makes the approach also efficient. With this project, the concept of a fully automated 3D printfarm is proven by one working and integrated 3D printer into a production line with the possibility of multiplying that prototype work station.

The integration of a 3D printer into an existing production line is accomplished by setting up a 3D printer on top of a conveyor belt of a production line (Fig. 1). The printing works as automatically as possible. The process starts, when the good carrier has arrived and the carrier leaves when the printing has finished. Furthermore, it is possible to print a second time on the same product, after some other classical production processes, or the print could even be on top of another product. 3D printing is slow and the cycle time of a production line can never be met. However, this concept shows that multiple printers can be integrated in a production line. The existing conveyor system could distribute the products to idle printers, such that other production processes were not halted. The printer is assembled and modified to fit the existing work station of the production line. A missing key feature is an elevator mechanism that lifts the work piece carrier to the ground level of the 3D printer. A construction with aluminum profiles, a threaded rod and a linear actuator is realized for that (Fig. 2). The carrier for the work pieces has an integrated heat bed to enable a print directly on the carrier. A homogeneous temperature distribution on the carrier is essential for a good printing quality. A Raspberry Pi controls the handover process between the production line and the 3D printer. It reads in the database of the programmable logic controller (PLC) of the production line which operation is to be performed on the work station and can change the print. The process starts with the carrier arriving at the station and the PLC giving the Raspberry Pi a handshake. The Raspberry Pi drives the motors for the lifting process and positions the carrier at the ground level of the 3D printer. At that point the Raspberry Pi yields control to the printer itself with another handshake and the printing information. When the print is done, the process works in reverse order and ends with a go flag from the Raspberry Pi towards the PLC that conveys the carrier then to the next work station. 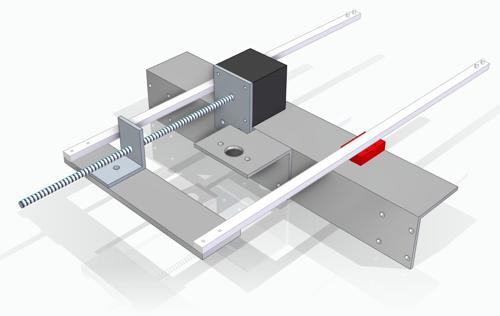