QUMEA is a Swiss startup which provides a novel approach to contactless patient monitoring with a high-precision 3D ultra wideband radar sensor. The system is able to detect even smallest movements like the chest motion caused by breathing. To find out if and how human respiration and heart rate could be included in future product iterations, exploratory research was conducted during this thesis to evaluate existing approaches of vital sign monitoring using radar technology.

The objective of this thesis was to provide an assessment to the project-sponsor whether or not an automated monitoring of a patient's heart rate is achievable using the existing QUMEA hardware. Special attention was paid to the automated detection of the patient's movement so that the vital signs are only recorded as valid if the subject is stationary and they can be measured with the highest possible degree of certainty.

During this project, a study with ten participants has been conducted where the radar sensor monitored the subjects in different settings while they were connected to a reference vital sign monitor. The setup covered a wide range of real-life situations where the QUMEA sensor is being deployed. A chain of signal processing algorithms implemented during this thesis was then applied to each of the recordings, which yielded an estimation of the subjects vital signs and an indicator of their overall movement behaviour.

The results suggest that the implemented algorithm is robust and can be reliably used to detect an overarching movement of a subject under monitoring. During phases where the patient was stationary, the vital sign estimation showed high agreement (> 90 %) for the detected respiration rate and adequate agreement for the automated heart rate monitoring. Subjects that exhibited an elevated resting heart rate showed slightly lower agreement with the reference heart rate due to interference with harmonic signals caused by the respiration.

The reliable movement detection paired with the accurate tracking of the respiration rate opens up a wide range of possible use cases for future development. For example, anomalies in the breathing pattern during sleeping or resting (i.e. apnea) can be detected and brought to the attention of caregivers immediately. 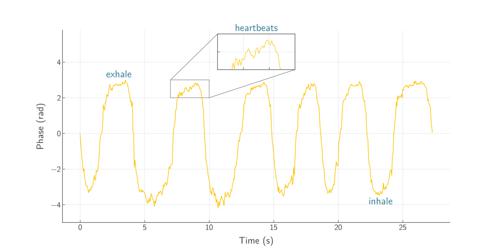 Respiration pattern of a human subject captured by the radar sensor as variation of the phase over time. The zoomed-in region shows the heartbeats which are modulated on top of the thorax movement.
Back to search results