We want to test, if the current virtual reality technology is powerful enough to implement a hockey goaltender simulator. The project is being developped for the Federal Office for Sport, to evaluate the feasability of a training simulator in VR. We use position trackers to visualize a goaltender character in our simulation, that behaves the same way the player does.

The project was commissioned by the Federal Office for Sport (BASPO) to see the limits of the VR technology and the possibility to extend training in a virtual world. The simulation aims to explore the limits of high-speed collision detection in a fast-paced sport such as ice hockey. To give the player the maximal level of immersion we designed a realistic environment in a hockey stadium, where several opponent players shoot from different positions with a speed of up to 47 m/s.

The first step was to find a suitable game engine to write our simulation, for which we chose Unity. We had to conduct tests to see if the physic engine can reliably detect collisions and react accordingly to it. After the successful test runs, we explored further physic engines to compare and choose the best for our situation. We used the best VR headset currently available on the market, the Valve Index, which can display up to 144 pictures per second and has one of the highest field of view. This setup is necessary for the player to be able to react fast enough to the approaching pucks. A GTX GeForce 2080Ti graphic card was used to provide enough computation power to create a realistic simulation and to calculate 288 pictures per seconds for both eyes combined. The second step of our project consisted of modelling the environment and implementing the controls for the goaltender. We used the library Final IK, which is responsible for the correct positioning of the limbs in combination with the trackers, to animate the goalkeeper character and adjust it to the player movement. To increase the immersion, we used real goalkeeper equipment such as leg pads and a hockey stick. The next step was to animate the opponent player with motion capture using the perception neuron system, which was mounted on the body to produce a lifelike shooting animation. We included a menu, where the player can adjust the height of the character for a better VR experience and choose the difficulty of the simulation. The last step was to add sound and realistic light. With a scoreboard we count the received goals and how many pucks the goaltender successfully defended.

Our extensive collision tests concluded that the standard unity physics can detect every collision between the goalkeeper and the puck and deflects the puck in the right direction. The performance tests reassured us that the simulation works at any time with more than 144 fps. With the different difficulties, amateur and professional hockey goaltenders can use this simulation to train their reflexes for the real situation. Every planned aspect of our project has been implemented and a working version of the simulator has been created. In conclusion, the current VR technology is suitable to train various sports in a VR environment.

With the current technology it is possible to implement different simulation such as tennis, badminton or other sports where timing and precision are essential. 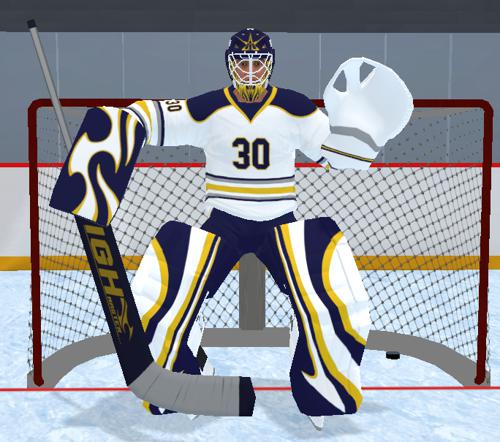