As a response to climate change, sustainable and resource-saving behaviour is required. On behalf of the BFH, an Audi A2 was retrofitted with second-life components in an interdisciplinary project. Retrofitting vehicles supports the idea of a circular economy, saves resources and mitigates greenhouse gases. However, the reuse of components in the automotive sector is an underresearched measure.

A project team consisting of four degree programs retrofitted an Audi A2. The combustion engine and its components are exchanged by a second-life engine of the Nissan Leaf and a second-life battery from Smart. The costs of this retrofit were calculated and the associated greenhouse gas mitigation potential was analysed and evaluated. The results are measured in CO2-equivalent which measures the global warming potential (GWP) of each greenhouse gas and allows to compare results.

The time expenditure of retrofitting the Audi A2 in this pilot project amounts to 851 hours. Considering a standardised project, it would take 466 hours. An hourly wage of CHF 54.00 was used. Figure 1 illustrates the costs for both projects, differentiated in five cost components. The purchasing costs for the components amounts to 13'684 CHF. The total costs amount to CHF 59'638 and CHF 38'848, respectively.

The life-cycle assessments of an internal combustion engine vehicle (ICEV) and a battery electric vehicle (BEV) are separated into the manufacture cycle and the use cycle. The manufacture cycle is independent of the driving distance of the vehicle, whereas the emissions in the use cycle increase per kilometre driven. The production of one BEV emits more of an ICEV, whereas the ICEV emits relatively more than a BEV. This leads to a break-even point at about 81’000 km with regards to the GWP. Then, four scenarios were used as options for a vehicle owner when a car reaches its end-of-life (Figure 2). A retrofit enhances the lifetime of a vehicle by about seven years. The results show that retrofitting a vehicle instead of a new purchase, the overall GWP of the car decreases by 27’083 kg CO2 equivalent. 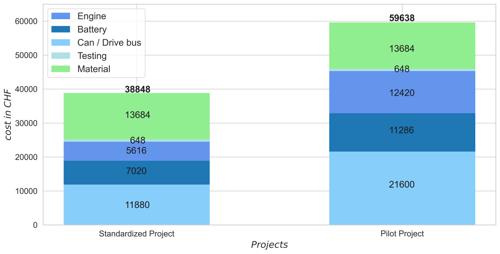 Figure 1: Total costs of both projects