Cell phones have changed our lives in recent years in many aspects. In security-sensitive areas such as penitentiaries, public organizations or companies with sensitive data or infrastructure, they increasingly pose a considerable threat. We focus on the planning, installation and optimization of a cell phone indoor localization system for a high security penitentiary.

The omnipresence of cell phones is becoming a problem in sensitive areas. For example, mobile phones are nowadays one of the most trafficked commodities in prisons and can be used not only to plan an escape but also to commit new crimes such as organizing drug trafficking, blackmailing or threatening witnesses or even prison staff in their private lives. In recent years, the Institute for Optimisation and Data Analysis (IODA) has developed a cell phone indoor localization system in collaboration with the innovative Swiss company Comlab AG located in Ittigen (BE). The system continuously scans the entire building for mobile radio signals with antennas installed on the outer facade around the building. Cell phone activities are detected and subsequently localized using a so-called fingerprinting approach, which exploits the Received Signal Strength (RSS) from all the sensed antenna signals as a fingerprint of the electromagnetic topology of a given building. First, reference fingerprints are recorded for different locations in the building. Then, during normal operation, localization is obtained by comparing the continuously sampled fingerprints to reference fingerprints.

Based on an existing prototype, the focus was on the development of a minimal viable product (MVP) with subsequent optimization. First, the antenna concept was designed based on initial test measurements and associated simulations. The aim was to achieve a sufficient coverage to guarantee a cell phone detection and localization according to specifications. Second, the system, cables and antennas were installed respecting monumental restrictions. Third, the system was commissioned and the learning of the fingerprints of all inmate cells achieved. Fourth, the system was tested, detection and localization performances assessed and algorithmic optimizations were performed. The optimization focused on the computational load implying a parallelization of the preprocessing of the twelve antenna signals and the detection and localization process. The system parameters have been optimized with respect to the penitentiary environment and security staff handling. Particularly, an important problem was to ensure a high detection sensitivity within the penitentiary while guaranteeing an insensitivity for cell phones of neighboring residential areas.

The validation in one penitentiary building showed that the specified cell phone detection sensitivity of 80% over all inmate cells could be fulfilled. The specified localization of the cell phone within the desired inmate cell in 65% of the cases could also be achieved, even though phantom cell phone localizations were occasionally observed. The problem of interfering cell phones from the neighboring residential areas was not solved, but a concept based on directional antennas was developed. This concept will be implemented in the next phase of the project following this master thesis. The problem of phantom cell phone localizations will also be solved with the use of directional antennas and specific adjustments of its alignment. 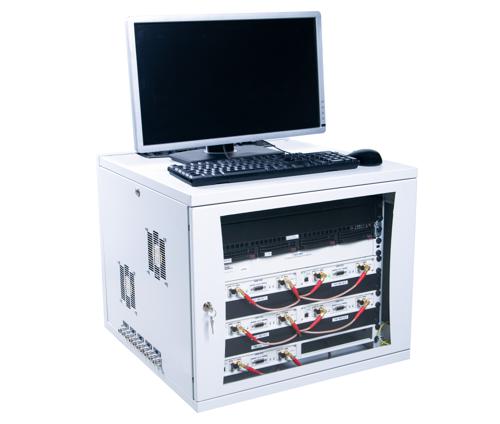 Hardware of the indoor localization system
Back to search results